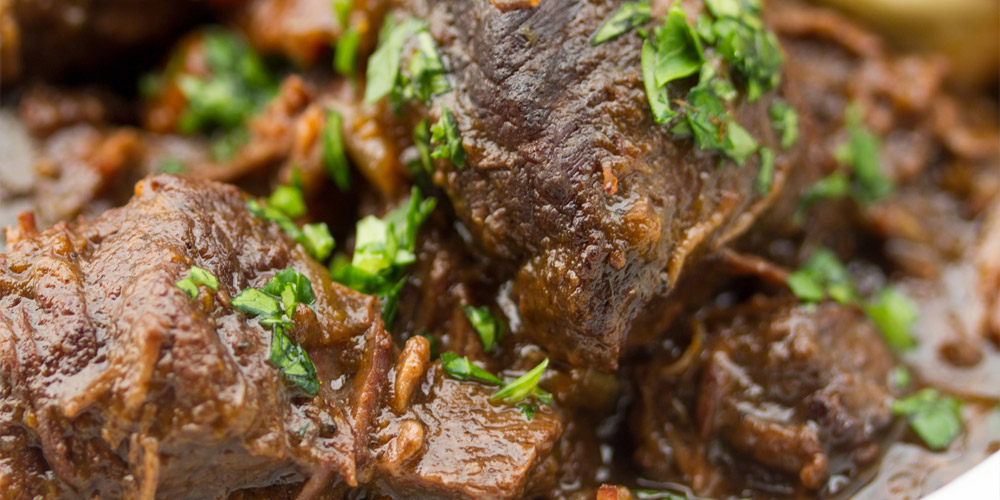 1
Rehydrate the porcinis in 2 cups of boiling water. Once they’re soft, pull them out of the water & mince them.
2
Season the beef cubes with 2 teaspoons of the salt and the pepper.
3
Sear the cubes in a hot, oiled skillet over high heat, until they’re browned on all sides (you may have to work in batches). Remove the cubes from the pan and pour in some of the wine, scraping up any browned bits clinging to the bottom.
4
Once all the beef has been browned, move it to the pot with the wine. Add the carrots, onion, and celery to the pan along with a half tsp of salt. Brown the vegetables, then deglaze the pan with the remainder of the red wine.
5
Add contents of the pan to the braising pot along with the bay leaves, beef stock/bouillon, strained rehydrating liquid and porcinis.
6
Bring the liquid to a boil, then reduce the heat to a simmer, cover the pot, and simmer until the beef becomes fork tender (about 1 ½- 2 hours).
7
Once the beef is tender, strain out & reserve all the solids from the pot. Bring the liquid back to a simmer & cook until it has reduced by half.
8
Press the flour into the butter. Whisk it in to the simmering braising liquid & cook until the liquid thickens.
9
Taste the sauce & add white wine vinegar to taste (plus additional salt if necessary). Stir in the solids. Serve