John Acland’s family immigrated to New Zealand from the south of England in 1854, settling Mt. Peel and starting a farm there.

Mt. Peel’s 12,000 acres of land ranges from river flats (approx. 3,700 acres) to foothill country that makes up the rest of the farm. The Aclands run a mixture of 13,000 sheep, 2,000 cattle and 6,000 deer on that land. Over the most recent period they’ve been increasing their stock numbers, but now they’re in a consolidation period where they’re focusing on developing the land and their husbandry to better finish the animals in a shorter period of time.

Asked what it’s like farming deer, John says they’re majestic creatures, but trickier to handle than the more docile sheep and cattle. They’re more easily frightened and their jumping ability requires 6’ fences to keep them in pasture. That said, they’re also more self-sufficient, living as if wild in his hill country without human supervision for seven to eight months at a time.

John’s goals include farming sustainably and profitably in order to have a fruitful farm to pass down to future generations. In the shorter term he’d like to see more of his steers grade into Silver Fern’s more exclusive programs like the Reserve program.

John gets a kick out of knowing his meat is being enjoyed in the US. He’s always been interested in asking where the meat comes from when dining out, and he’s happy to know that his farm is the answer at some high end American restaurants. 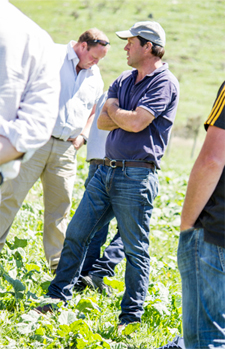 If he could send a message along with the meat, he’d say that customers can rest assured that the meat they’re buying was produced in an animal friendly & ethical way, brought up truly free range, in some of the best farming country in the world. It couldn’t be raised in a better place.

For his own part, John’s favorite cut is a porterhouse steak cooked on the barbeque, though he’s also partial to venison fillet/backstrap and a good frenched rack of lamb.

Working with Silver Fern Farms today is an easy decision for the Aclands. They’ve worked with the coop for a long time, and feel they have a good working relationship where they can discuss anything and be heard. They’ve always looked out for the Aclands’ interests, and that makes them loyal.